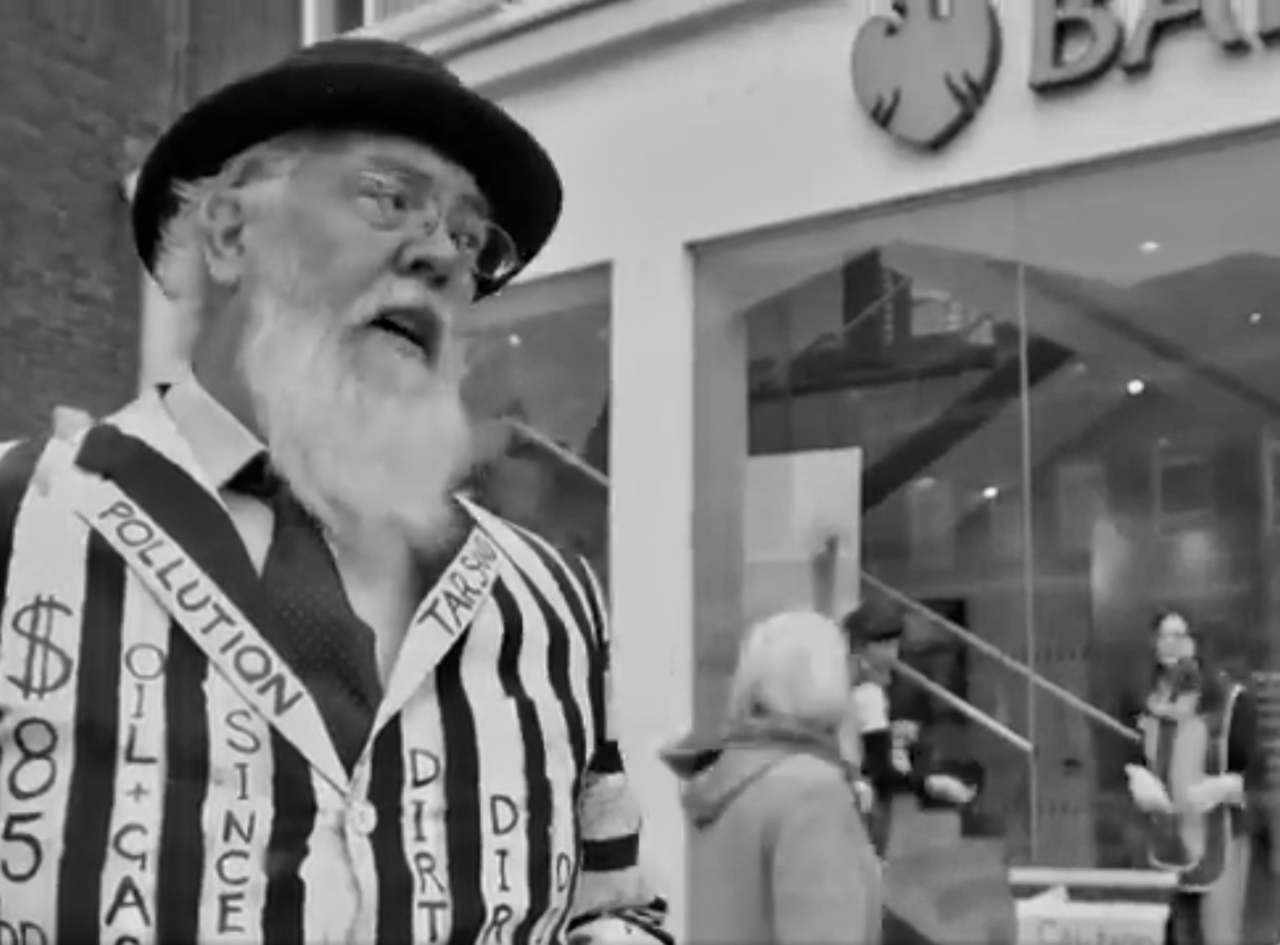 I’m not sure a typical activist exists – but it’s definitely not me.  It was quite late in life before I can claim to  having strong eco concerns and I also arrived late to Buddhism.   I’m afraid I worked in the City as an IT consultant for many of the banks funding the eco crisis.  I did fairly well from it, and looked after my family,  including frequent flights to the Caribbean to see the in-laws.   I can’t say I had a sudden ethical awakening and left the city because of it. But some sort of unknown, little understood crisis was emerging in me.  I left my well paid City job to work repairing wooden boats, maybe being in the outdoors and on the water so often brought me back to my youthful connection with nature.

Just six years ago in 2015 during a difficult life period,  the rumbling internal crisis caught up like a Tsunami and severe anxiety led me to Buddhism in 2015.   In 2016 I read the book “This Changes Everything” by Naomi Klein and was incensed to learn about all the Ecocide going on.  I had no idea what to do with that feeling.  My poor wife’s ears.  I continued to meditate, my anxiety subsided in some ways but rose in others as my concern at the injustice of what was happening increased.  I floundered for a while, I’d seen so many petitions etc come and go over the years.  I gave up meat and made many other personal changes.  I have many more to do, I am quite the hypocrite still.    I eventually discovered XR and also Joe at DANCE and went along to an incredibly noisy Barclays meditation protest in Trafalgar Sq the same day XR occupied the bridges. As a newbie at some point I found myself locked outside the Bank in adhoc liaison with a crowd of Police while Joe, Mark and Rowan meditated on inside.  I just told the police to wait, these people will surely need the loo soon.

Taking action worked wonders on my anxiety, I was alive again,  a human in touch with the cries of the world.   My local XR group grew and we did lots more actions locally and together in London.  Waterloo bridge supporting the Wellbeing tent was one of the highlights in my life.  The prospect of blocking four lanes of traffic in Marble Arch – one of the scariest.  ‘Go in with your knees knocking, it’s good spiritual practice’ I was told by Rowan.

But my background and personal circumstances meant that my high levels of anxiety returned, occasionally this turned to depression.   So eventually I started to step up self care,  meditating more regularly,  more personal ethical lifestyle changes helped the despair a little bit.   I found the excellent guide by Vessantra called “20 steps to avoid overwhelm” very helpful.  A year later I eventually gave up my Facebook addiction. While posting stuff about the eco meltdown felt good in some ways it was probably stressing others.  I tried to balance it for a while with hopeful and humorous Facebook posts.  Now I rarely look at it and I feel so much better, less distracted, more focused. The world still goes on, I do need to establish a less distressing and balanced way of keeping abreast of news and contact with friends.

On and off I tried my luck to get my lovely local Sangha to take on board environmental concerns within the context of Dharma but this was a struggle so for a while I decided in practical terms to separate my Dharma practise and Eco efforts.  Inside me they were inseparable.  I’m glad I now have this sangha too.

I was invited to take up Samba drumming with my local XR,  this was hugely therapeutic –  music, outdoor practise, friends and laughter.  Making a noise to protest was a strange contrast to sitting quietly in protest outside a bank.  Even the Parliament Sq arrest for I can only guess drumming out of time was enjoyable.

We all know what we face in the world but at times we must have fun.

I did a workshop with Parami along the lines of Joanna Macey’s ‘seeing with new eyes’ where we role-played eco concerns.  I was paired with a young girl, 17 who I could see was really very scared for her future, as an older guy with a past life far from ethically perfect  – I felt ashamed.  That memory drives me.  I never feel I do enough activism but I have to balance that with my own well being.  I’m not an academic which can limit my confidence in speaking out which frustrates me. I’m currently doing an excellent course on having difficult conversations which may help with that perhaps.

In part helped by Catherine Ingram’s article called ‘Facing Extinction’ I started to grieve for the world I knew and loved,  I started to accept that much of it was gone or going. Bizarrely this helped. Grieving helped ease the tension in me of what we faced.   I started to let go.

I of course still feel the urgency and the weight of what we face but I’ve come to realise this –   I may not have the genius and appeal of Star Treks 7 of 9 but like her I need to plug in and regenerate on a regular basis.  Our self care is equally if not more important than the activism.  Be kind to yourselves and dare I say – May we all “live long and prosper”

Les is Retired, Wrinkly and Repenting

Posts and articles are the views of their authors and not necessarily of the XR Buddhists group.

"All of us know that our beautiful green planet is in danger. The future of all life, including our own, depends on our mindful steps.  "