Faith groups in six cities converged on selected Barclays banks on 18th October to highlight their leading role in fueling the climate crisis. In London, Glasgow, Bristol, Brighton, Shrewsbury and Sheffield, Buddhist groups sat in protest vigils, and engaged with the public to bring attention to the fact that Barclays investments constitute a very real threat to our future. They are the highest investor in fossil fuels of any bank in Europe, and in the years since the Paris agreement in 2015 they have invested $145 in coal oil and gas projects across the planet.

The day was part of Greenfaith’s Faith 4 Climate Justice two days of action to send a message to Governments and corporations in the run up to COP26.

As XR Buddhists gather in London outside the Tate Modern it’s good to know that we are part of something bigger: that our friends in other cities are with us today. We sit in meditation, and we spend some time connecting with what brought us to engage in this action. If we take time to reflect in this way, we often find that our motivation for any particular action connects both to personal history and to what we hold dear in the world. This is the wellspring of a wholesome and reliable ground from which to act. Without it our actions can too easily become motivated by anger and blame.

As we set off for the slow 20 minute walking meditation down Fleet Street to the bank we attract a lot of attention, most of it silent: people take pictures or turn to look at our placards, some of which show a burning Earth with the words ‘Barclays: the Ecocide Bank’ underneath. This is a reference to the law of Ecocide which the Ecocide foundation, hope to make a criminal offence, along with other international crimes such as genocide.

On reaching the bank we settle down to meditation. As the meditators take their place in a line on the pavement I am struck as always by the quiet power and grace of the meditative posture: so rare and precious in a bustling noisy cityscape. I am handing out leaflets; I am pleased to see that most passers-by glance at our banner. It is hard to miss: it reads in very large script: ‘Barclays: Funding Climate Breakdown.’ I pop inside the bank to hand in our letter to the manager, to be told by the cleaner that they are not in. No police are called. It’s only later that I see someone who is probably a manager (smart suit, Barclays blue tie, definitely ignoring us) hurry into the bank, followed by someone who looks like a security guard.

I hope he looks at our letter some of which reads:

Sitting in silent meditation we bear witness, and bring to the publics’ attention that Barclay’s investments constitute a direct and imminent threat to their future.

We send our kindness and care to the staff of Barclays bank; their lives will also be impoverished and disrupted by climate impacts. But we consider that as a company, Barclays investments demonstrate a reckless disregard of the scientific evidence, the safety of its customers, the planet, its people and the other species with whom we share this world.

I hope this might reach him, but there is no way of knowing. Likewise, there is no way of knowing what is going through the mind of the woman who takes a leaflet and then very deliberately rips it up a few paces further on. What does she find so offensive? Although I find myself thinking I would have liked to speak to her, I doubt anything I said would have changed her mind. A few people stop and talk and are unpleasantly surprised to find they are with banks that have little regard for the future. Many take a leaflet but hurry along without engaging. .

Forty-five minutes later we set off again in a slow paced meditation line to reach a green space near the river. We meditate, reflect and send our gratitude to ourselves, to each other and to all beings on this one precious blue-green planet which we have been gifted.

There is little sign of Barclays grasping the reality of what the future holds and acting accordingly. We are in for the long haul; sustained perhaps by Thomas Mertons words:

Do not depend on the hope of results. You may have to face the fact that your work will be apparently worthless and even achieve no result at all, if not perhaps results opposite to what you expect. As you get used to this idea, you start more and more to concentrate not on the results, but on the value, the rightness, the truth of the work itself.

What else is there after all, but this? 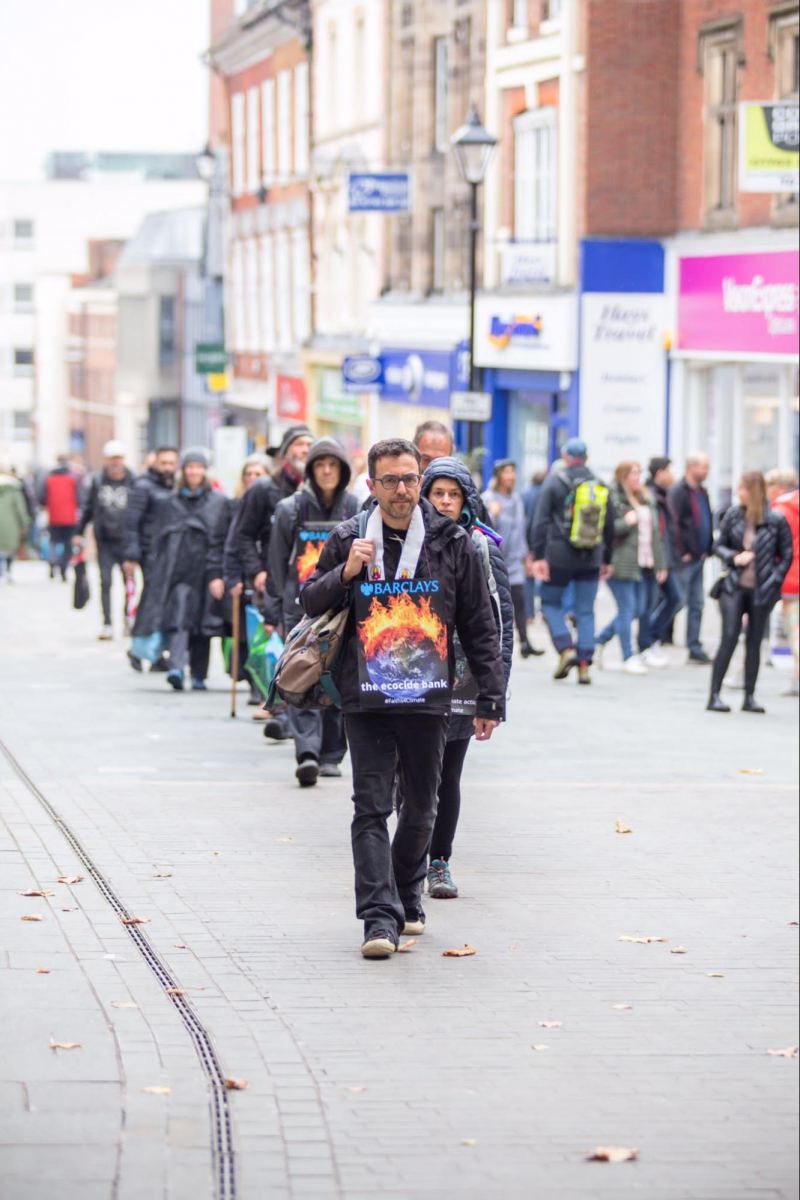 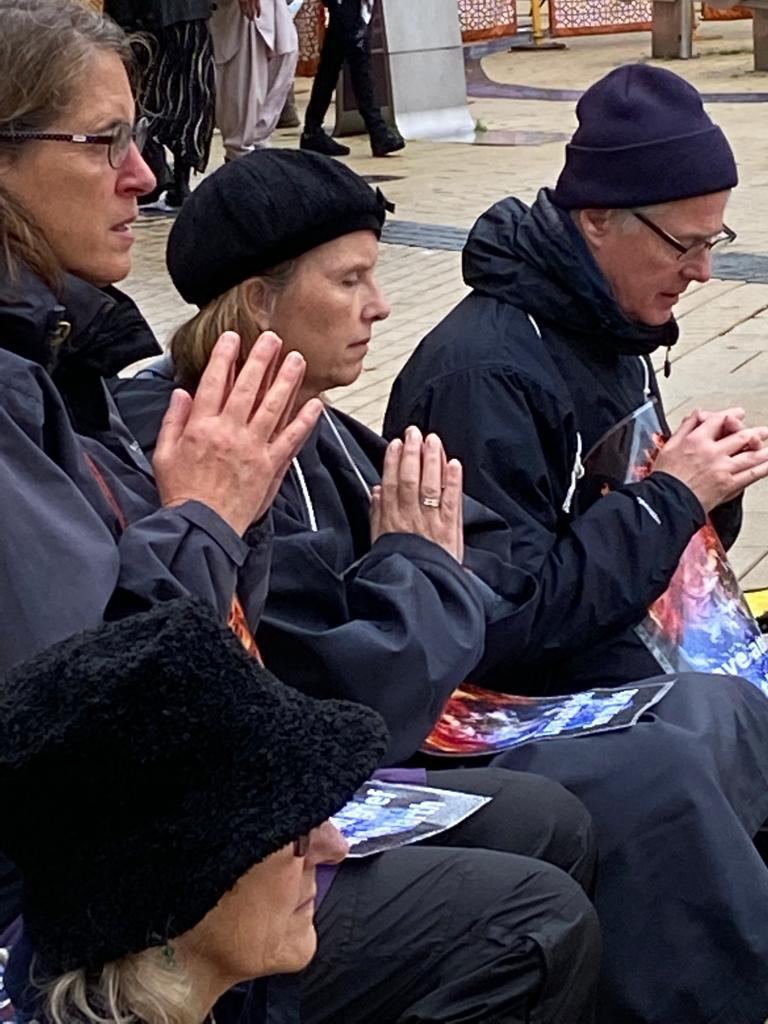 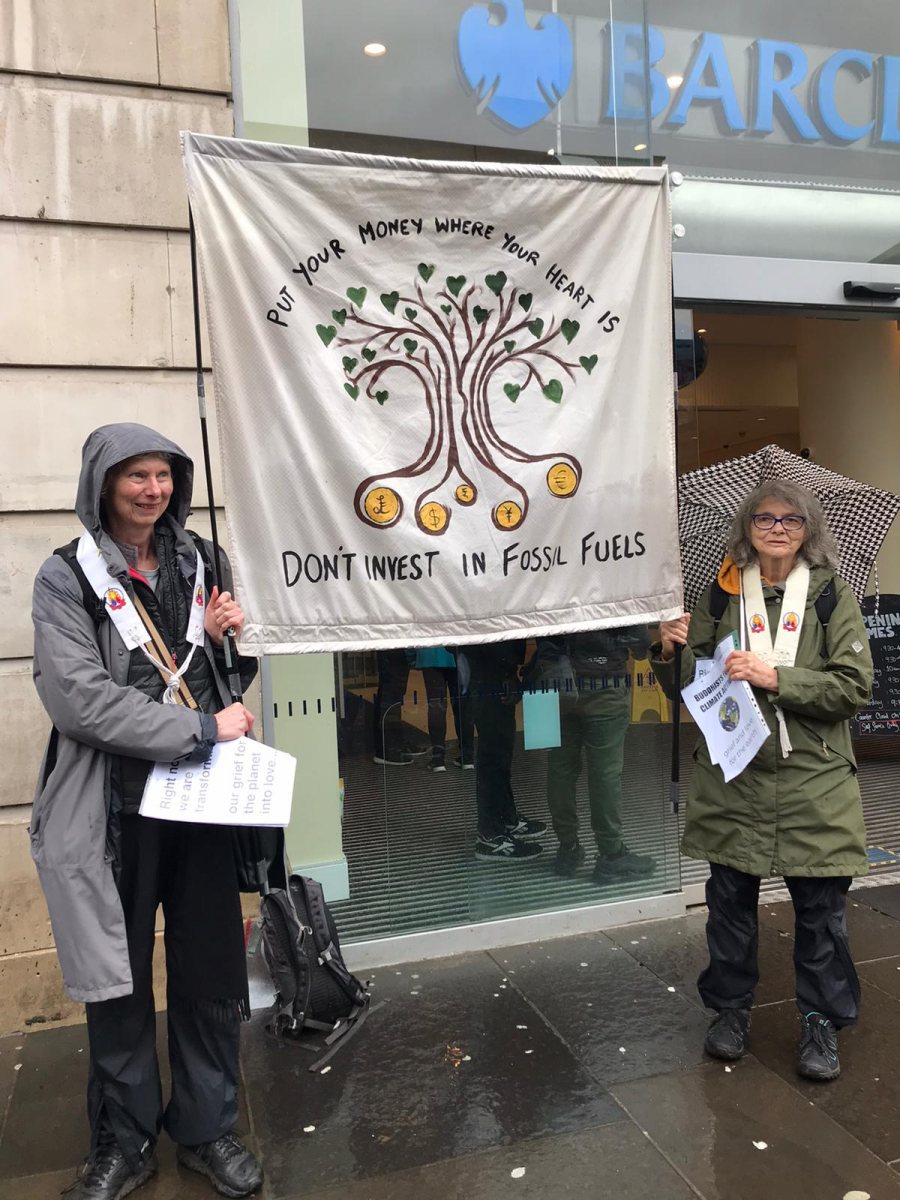 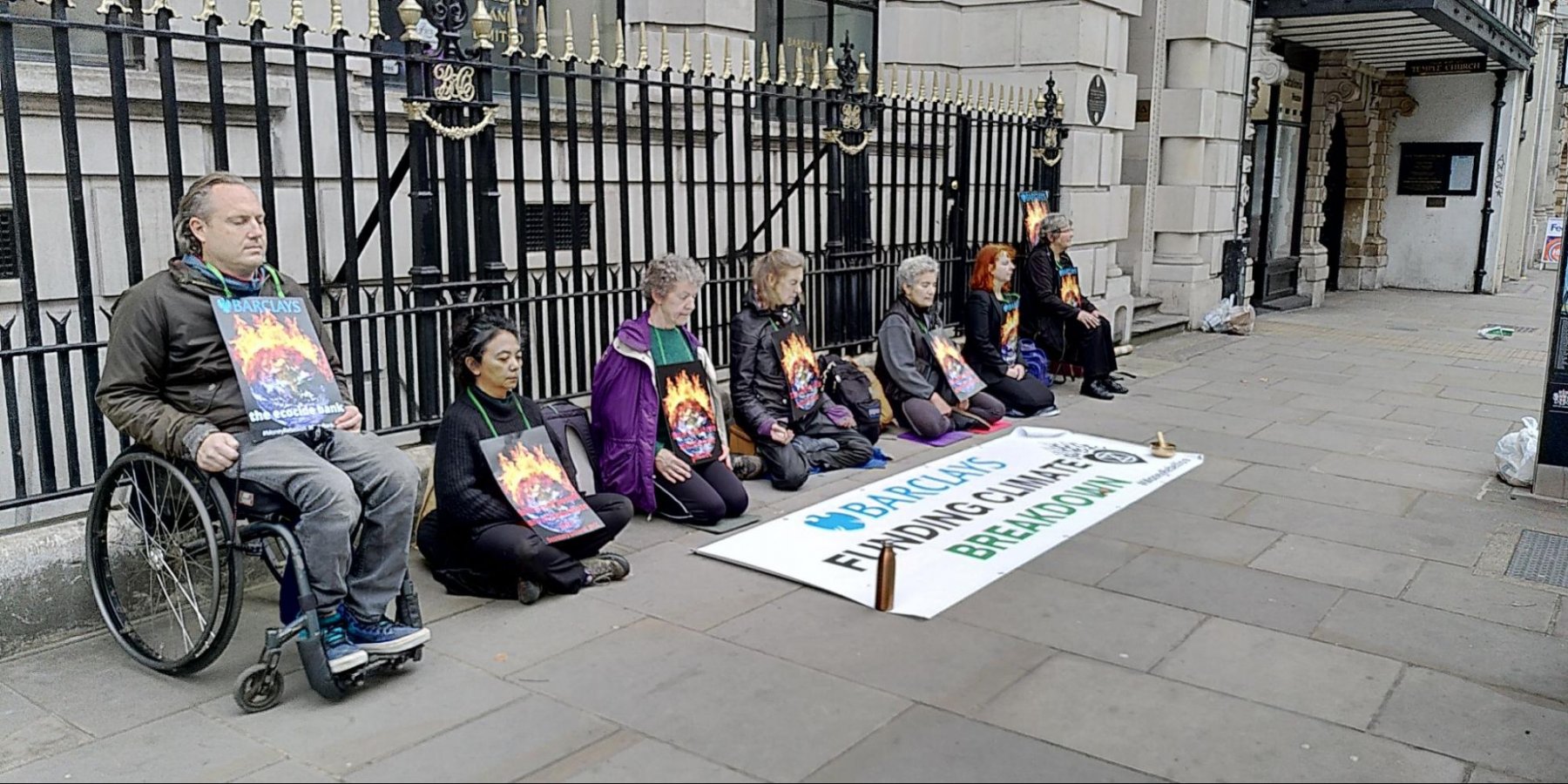 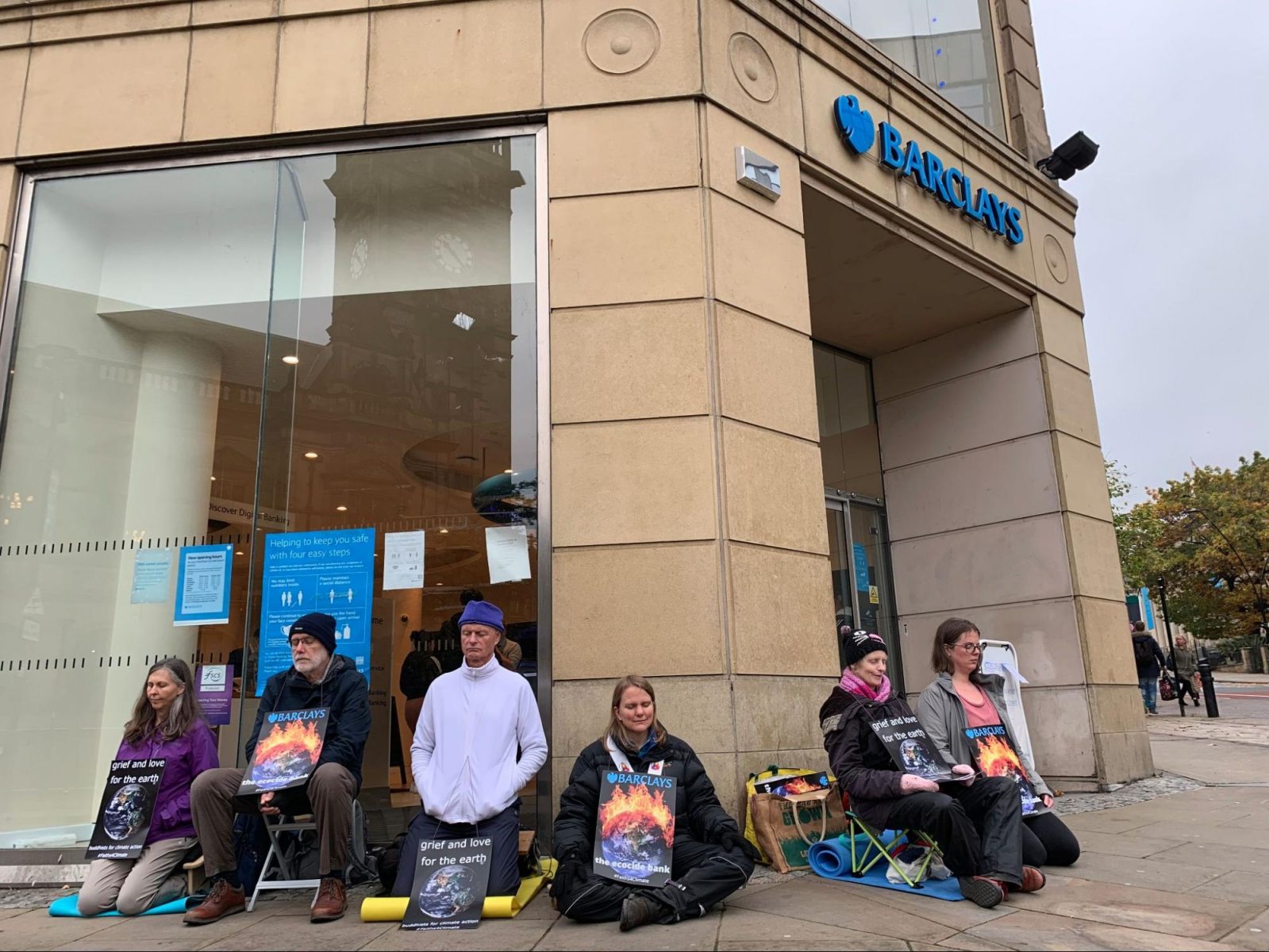 Posts and articles are the views of their authors and not necessarily of the XR Buddhists group.

"The bells of mindfulness are calling out to us, trying to wake us up, reminding us to look deeply at our impact on the planet."